November 3rd Songwriters in the Round Show! 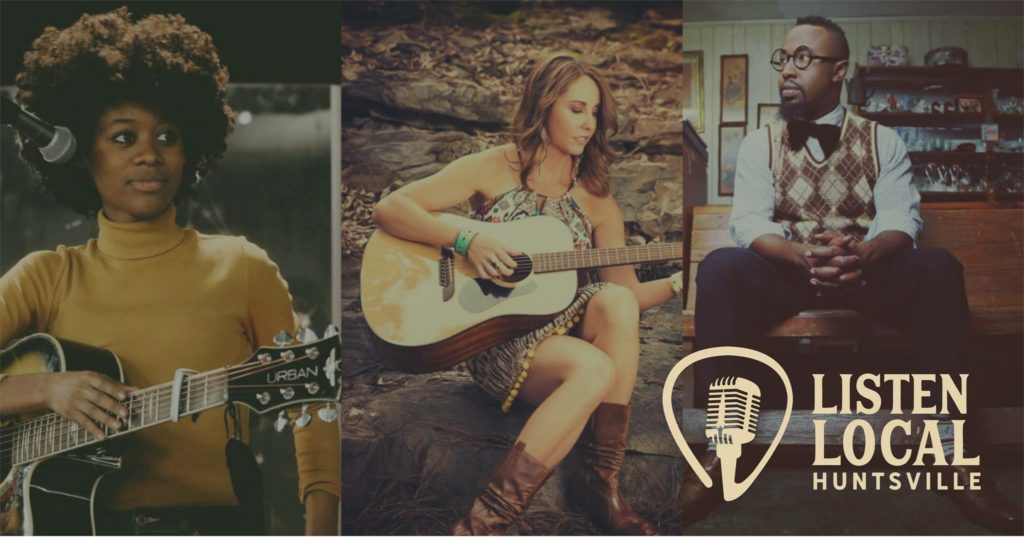 Friends! I am so thrilled to be included in a lineup of immensely talented, local artists who are making such an impact within (and beyond) our hip, musically evolving town of Huntsville AL!   I was asked by local singer-songwriter, Alan Little, to be a part of his very popular “in the round” series called Listen Local. The event is held at Tangled Strings, a local luthier shop owned by Danny Davis, who constructs gorgeous, unique guitars and so much more. The shop also contains a stage for live shows. “The Live Room – This is a premier concert venue within Tangled String Studios. Our artist-centered approach to music production focuses on live performance. We host intimate live shows in our acoustically treated live room, which facilitates a unique and one of a kind experience. We believe that this environment enables dynamic recordings and intimate performances.”  If you are ever in Huntsville, you have to stop by and see this place for yourself; it’s unlike any “guitar shop” you’ve ever visited.  Below I am going to give you a little insight into the amazingly talented folks I’ll be performing with on November 3rd.

Alan Little, the host of Listen Local, is an accomplished guitarist and singer-songwriter, and a staunch advocate of Huntsville music, musicians and songwriters. He is best known for his finger-picking acoustic style and direct soulful lyrics.  Alan, a Huntsville native, has been and a fixture of the Huntsville music scene since his height of the Tip Top and played at various venues throughout the southeast as a drummer for Plaid and later Cornbred.  Alan, and his business partner, John Schmitt, have created something very special in our area with Listen Local.  An excerpt from the LL website states – “Both, with original music a soundtrack to their foundational lives found an incredible opportunity to help support, promote and showcase the phenomenal musical talent of North Alabama.  With so many talented singer-songwriters locally, Listen Local Huntsville was born to do it’s part to ensure that a rich musical culture is sewn into the fabric of Huntsville’s growth in the coming years.”

Kelvin Wooten is a Grammy-nominated producer, engineer, and multi-instrumentalist whose past collaborations include Mary J. Blige, Earth Wind & Fire, TLC, Anthony Hamilton, The Bee Gees, and Musiq Soulchild. He also co-wrote and produced the song “Freedom” which was heard in Quentin Tarantino’s Academy Award-winning Django Unchained.  Wooten runs a studio and label – both dubbed Woodaworx – out of his Huntsville, AL, home base. Between recording platinum artists like Hamilton, developing exciting new voices like Deqn Sue, honing his Maschine chops, and ALWAYS serving the music, Wooten is a study on how to keep moving forward on all fronts.

Victoria Jones is a singer-songwriter whose soulful voice and musicality is a blend of neo-soul, pop, and R&B. Victoria seeks to write music that speaks to everyday life and situations. In 2016 Victoria released her debut EP “White Butterfly.” With all songs written and composed by her, Victoria joined forces with 318 Productions of Huntsville, AL, recording her works as an Independent artist, and later had her project mastered and mixed by Grammy Nominated Kelvin Wooten!  Her music is streaming in 8 countries, and she is getting lots of local attention for her beautiful, uplifting music!

My musical journey just keeps getting richer and more layered with each opportunity, and I am so very grateful!